March sees record house prices for NZ driven by regions. Volumes down year-on-year says REINZ – In their monthly press release last Tuesday, the Real Estate Institute of New Zealand reported that median prices in Auckland fell 2.2% year-on-year to $880,000 but this was compared to March 2017 which saw the region experience the record median price of $900,000. It’s also due to the mix of properties sold – the under $750,000 price band had 4% more sales this March and the $750,000-$2 million price band had 5% fewer sales. On a month-on-month basis, prices in Auckland increased 2.9%. The REINZ HPI demonstrated a 1.0% increase indicating a more stable market.

Bindi Norwell, Chief Executive at REINZ says: “March was a very strong month from a price perspective with record prices achieved for New Zealand, New Zealand excluding Auckland, Gisborne, the Hawke’s Bay and Wellington. Looking at the whole country, median house prices increased in 13 out of 16 regions – the only regions not to experience an increase were Northland, Auckland and Taranaki.

Volumes down for March – The number of properties sold in Auckland during March decreased by 12.0% year-on-year with 2,386 sold in comparison to 2,712 in March 2017 – again off the back of a high comparative figure. 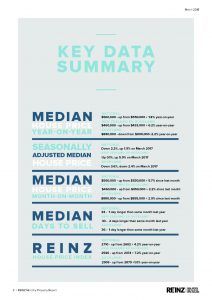